At level 15 you can participate in the event.

If you have not played for a while and are no longer in the leagues, you can only play again when the next round starts.

Here you can find all the information when the next event starts. 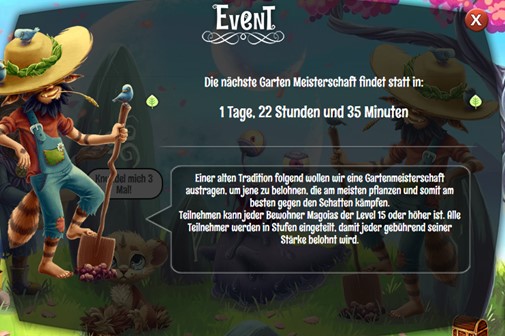 Here you can see when the event has started. 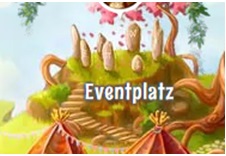 If the reward from Cuddle has already been collected, only the symbol for the garden championship will appear 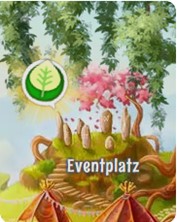 The tasks are displayed when you click on the leaf at the gardener or on the right at the quests. 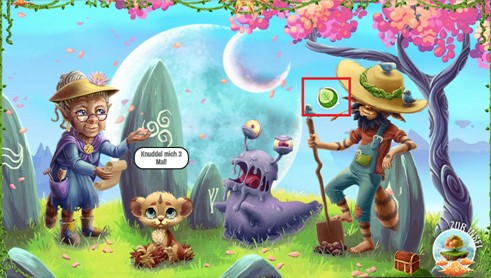 The event icon will not appear on quests until all quest tasks have been completed. 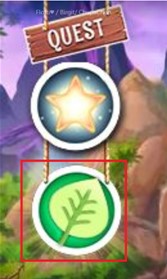 If the leaf appears at the event location during the event, this indicates that you have completed one or more tasks.

On the right you can see the level you are at and the number of leaves you have collected. 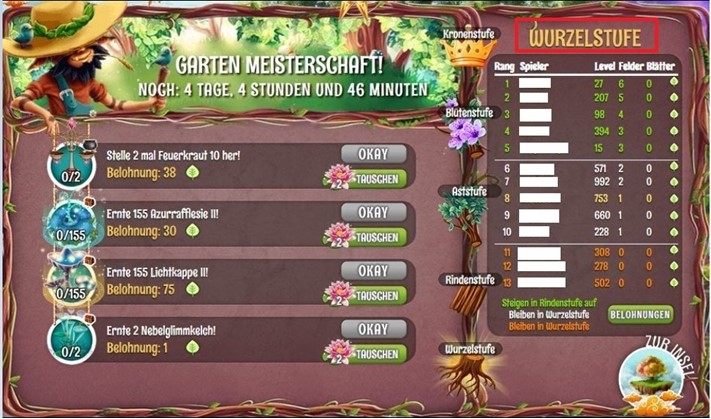 Explanation:
- The whitened squares contain the names of the players, according to their rank.

Once you have completed all the tasks, the Okay appears in green and you can complete the tasks together or individually.
You will get new tasks immediately. 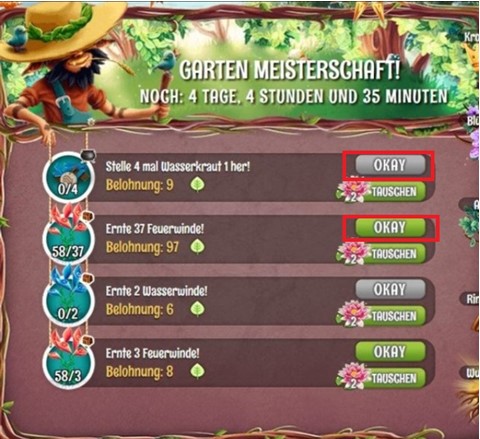 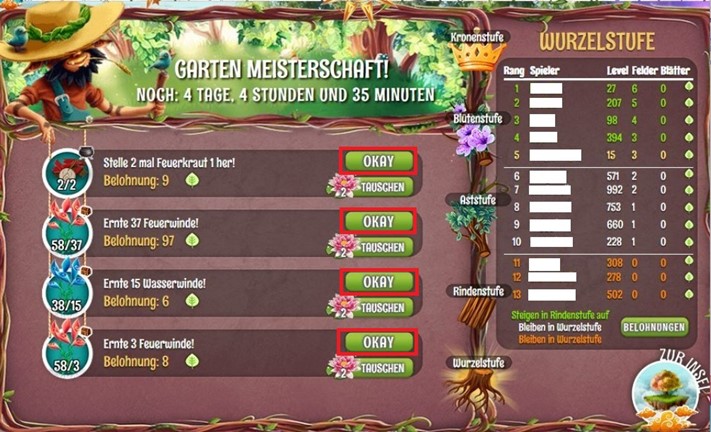 If you do not like a task, you have the possibility to change it for 2 water lilies. You will not get any leaves, for the unfinished task
If you then complete the exchanged task, you will of course also receive the reward for it.

Each row counts for itself 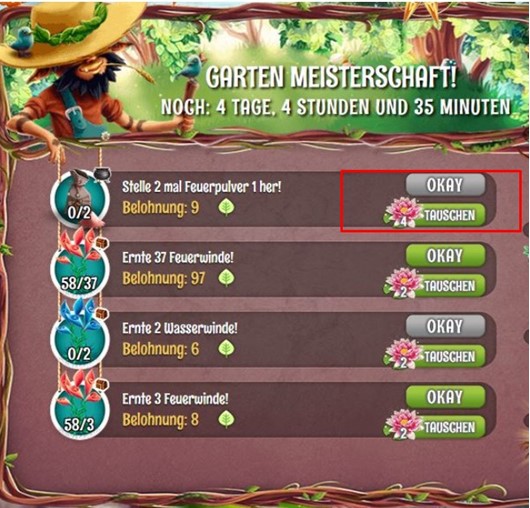 Here the players are already in the next level of the garden championship. 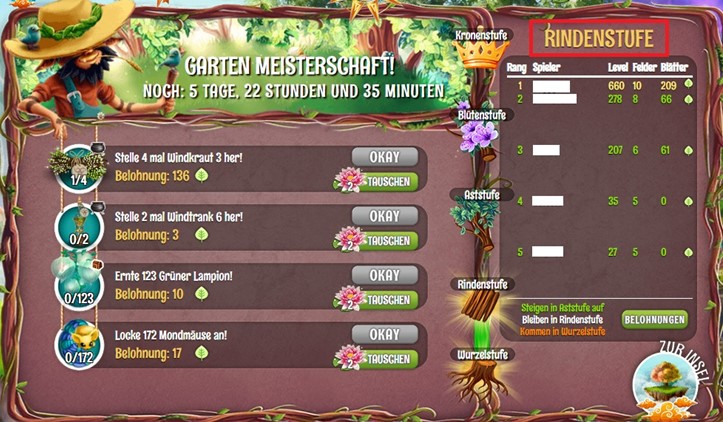 The player has reached the bark level here.
He can see which place he has currently reached and for how many fields he would receive an extra yield. 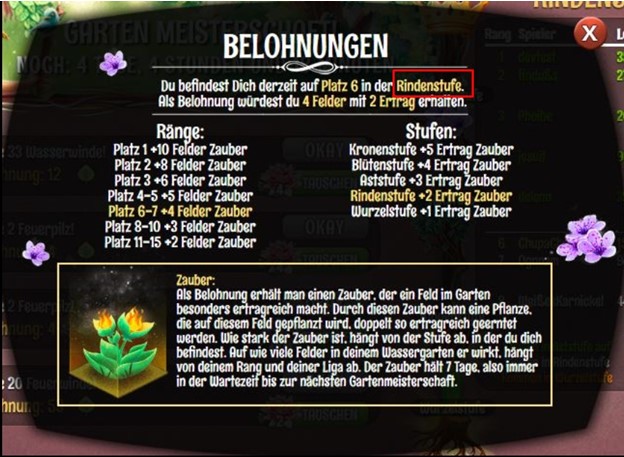 At the end of the event the rewards will be distributed.

The colors change depending on the level at which the rewards were distributed.

Here are 5 blue fields, which the player has received as a reward in the root level. 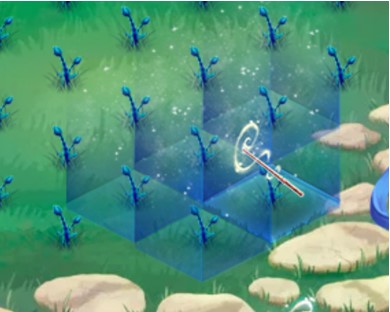 Here the bark level has been reached and thus the fields are displayed in the color cyan. 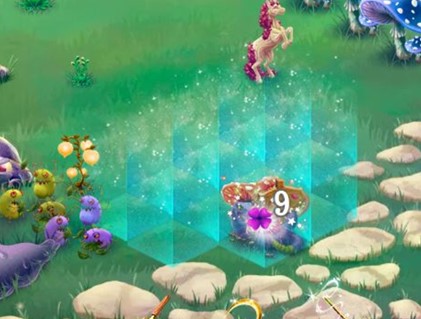 In the branch level, the reward fields are marked in green. 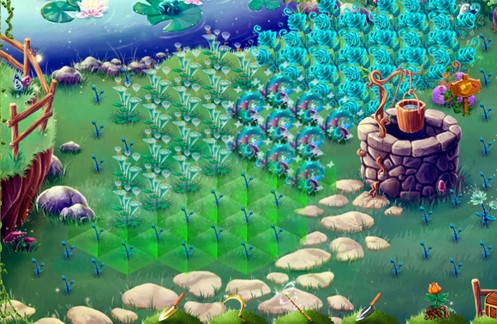 In the next stage, the blossom stage, the reward fields change to purple.

In the last level, the crown level, the reward fields get the color yellow.
"My acorn is missing... Did you eat the acorn?... You owe me a new acorn."
Top
Post Reply
1 post • Page 1 of 1

Jump to
Powered by phpBB™ • Design by PlanetStyles